Ushering in a New Age 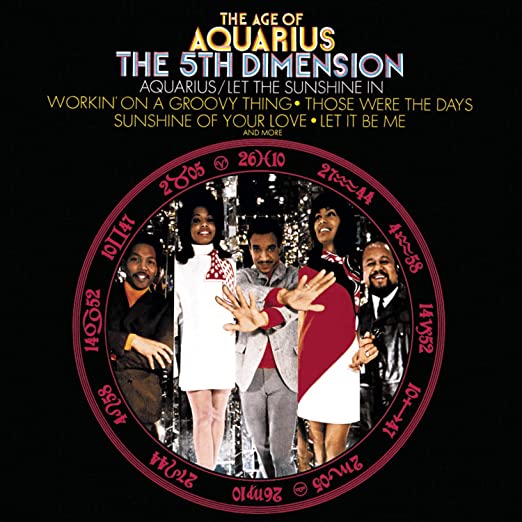 We were about six and eight, my brother and I, when we snuck into the cabinet of the built-in bookshelf to look for my parents’ sex manual. As we were pawing around in there, I became captivated by something equally mysterious–the Age of Aquarius album by The 5th Dimension.

Tucked in with Sergio Mendes and Engelbert Humperdinck was the smartly dressed group of five inside a mystifying wheel, the middle guy’s hands doing some sort of hocus pocus. I was awestruck!

And today, I can’t get the lyrics out of my head. Sing along with me if you know them:

Although released in 1969, the song couldn’t be more relevant today. Monday, December 21 is Winter Solstice, the longest night of the year in the Northern Hemisphere. For many it’s a time to be grateful for what the darkness has shown us and to celebrate the return of the light. This year, we’ll also experience a Great Conjunction where Jupiter aligns with Saturn, not Mars like the song says (poetic license). These Great Conjunctions are special because they only happen every 20 years or so, but this one is extra special because it is the first time in 200 years that the alignment has happened in an astrological sign that is not an earth sign. This time the planets join in Aquarius, an air sign.

Hence, the dawning of Age of Aquarius–a time when we have the opportunity to be influenced by the energy of the Aquarius archetype. Some of the things we could be moving away from are the continued stripping away of the earth’s resources, the accumulation of material possessions, hierarchical structures and the focus on the individual at the expense of the whole. We may be looking forward to a greater sense of community, a more humanitarian point of view and a time when “alternative” healing practices are more accepted. In the Age of Aquarius, we’ll likely be valued for our uniqueness, but also be connected and working together for the greater good. That’s something to celebrate!

An astrological age lasts 2,160 years. And there is disagreement among astrologers about when the Age of Aquarius actually dawns, or whether it has already begun. So, since it’s unclear, I’ve decided to start living the Age of Aquarius now. Why wait? My greatest desire for this world is harmony and understanding, sympathy and trust abounding. I am heartsick at how we have treated our earth (and animals) and the harm that has been done by individuals bent on hierarchy, not to mention patriarchy. I’d love to live in a society that values unity. I’m ready for my gifts and talents to serve the greater good. Each of us can choose to live the ideals of the Age of Aquarius, and in that way we find ourselves in a more peaceful, loving world.

If you’ve made it this far in my story, I’m guessing you might agree with me. But, you also may have read this far to find out whether my brother and I found the sex book, and what we discovered inside.  Was it golden living dreams of visions, mystic crystal revelation, and the mind’s true liberation?