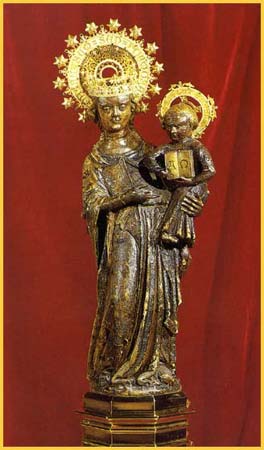 Have you ever had a really special moment, but not realized it until the moment was over? It happened to me last week.

I was privileged to take a short trip with my family to Mallorca, Spain, and on our last day we decided to visit the Sanctuary of Lluc in the Tramuntana mountains. In a small chapel behind the main sanctuary there is a Black Madonna statue, La Moreneta, considered the patron saint of the island. I am intrigued by Black Madonnas as an aspect of the Divine Feminine, and I have long wanted to see one. They are mysterious and often associated with miracles. Many believe they are representations of pre-Christian Goddess deities who have powerful associations with the earth. (You can learn lots more about Black Madonnas at Interfaithmary.net.)

The legend of this one is that in the 13th century, a young moorish shepherd who had converted to Cahtolicism found the statue partially buried in the dirt. He brought it to the local priest who placed it in a place of honor in his church 6 km away in Escorca. Overnight, the statue vanished and reappeared exactly where the boy had found her. This happened at least three more times, then the decision was made to build a church on the site where she was found.

What I didn’t know when I was in the presence of this legendary Black Madonna was that she is one! There was no indication other than some Latin wording that I couldn’t see, and I wouldn’t have known what it said if I had. She didn’t look like what I thought a Black Madonna would look like. Yet, she seemed to emit an energy I can only describe as sparkly, and I had a hard time taking my eyes off her. But it was only after the visit that it occurred to me to find out if I had, in fact, seen my first Black Madonna.

Since then, I’ve been reflecting on what I was supposed to learn from my experience, and I think the lesson is this: Stay awake for miracles. They are everywhere! It is so easy to get caught up in the worry, the stress, or just the mundaneness of life that we forget to see the wonders in our midst. They may be small or inconspicuous, and they may not look like we think they should. Sometimes life is so hard that we simply have to trust they will be revealed. But our miracles are steadfastly there in all their sparkly glory waiting to amaze us. What a gift in these tumultuous times!