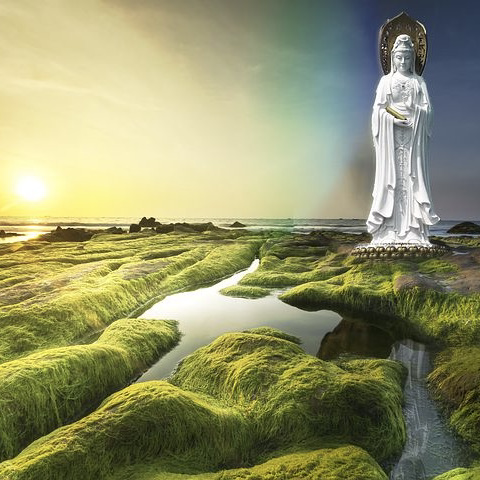 A couple of months ago, I read a collection of essays called Erosion, by Terry Tempest Williams. An image from the book still haunts me–a statue of the goddess Kwan Yin that Williams visited at a shrine to the Divine Feminine in Yunnan Province, China. Here’s how she described it:

“Kwan Yin’s right hand was raised upward with palm closed at shoulder height; her left hand protected a bowl resting on her lap. I raised my heels to look inside the bowl–it held her heart. I wept over what every woman knows. We give away our hearts daily. What remains is emptiness.”

As I read this passage, I wept as well. I knew this emptiness. I could feel it in my body. But why? There are myriad reasons, and the one resonating with me now is self-worth. If I trace back almost every empty feeling I’ve felt, the line points directly to a deficit of self-worth.

It’s a tricky thing, this admission of a lack of self-worth. In my younger years, I would have described someone with a self-worth deficiency as an insecure, self-sabotaging, hot mess. And, of course, that can be true. But at this point in my life, I understand that one can be a functioning, even happy, human and still be challenged by self-worth. I can see now how a more subtle self-worth deficiency has eroded my heart space. The worrying about what others might think, the longing for relationships I perceive that others have, the self-silencing so as not to hurt someone’s feelings, the placing of my desires on the back burner in order to be a more loving and generous person. The “you take the bigger slice of cake…oh heck, just have the whole damn cake!” syndrome that many of us are afflicted with.

The Buddhist deity Kwan Yin (also, Kuan Yin or Quan Yin) is known as the goddess of mercy. Her name translates from Chinese to “the one who hears the cries of the world.” She is said to listen compassionately to our prayers and intercede when we call out to her with sincerity. In some depictions, Kwan Yin has numerous arms and eyes and is even known as “the thousand-arms, thousand-eyes” Bodhisattva, representing the omnipresent mother, extending her many arms to alleviate the suffering of humanity and her many eyes to help her see anyone in need. Even mothers who are not deities can probably relate to the thousand arms and eyes feeling!

I believe the energy of Kwan Yin urges us to have compassion for others, but also to have mercy for ourselves, to value ourselves as equally important to everyone else in our lives. We must understand that self-love is not only not selfish, it’s crucial to living in our highest possibility. It’s something to think about this holiday season as many of us resentfully add tasks to our already full plates and others of us long for lives that carry the illusion of looking brighter than our own.

As merciful, compassionate and motherly as Kwan Yin is, she doesn’t appear to me to be a goddess who lacks self-worth. She is the epitome of the Divine Feminine: awe-inspiring and powerful! That’s one reason why this statue of the Goddess of Mercy with a hole in her heart space troubled me. So, in meditation the other day, I called upon Kwan Yin. I asked why she had given away her heart, and she said to me, “I didn’t. I’m holding it outside my body so the light can flow through.”

A couple of days later, Kwan Yin appeared in my meditation without being summoned. Standing high upon some craggy rocks, she showed me the vastness of the ocean and reminded me this ocean is me. She instructed me to lie on the sand, heart facing the sun.

Then, she said something I would like you to hear, too: “Care for yourself. You are worthy of all the love you give to others. Breathe the light of the sun in and out through your heart. Feel it nourishing you. Feel the place where the light comes in.”