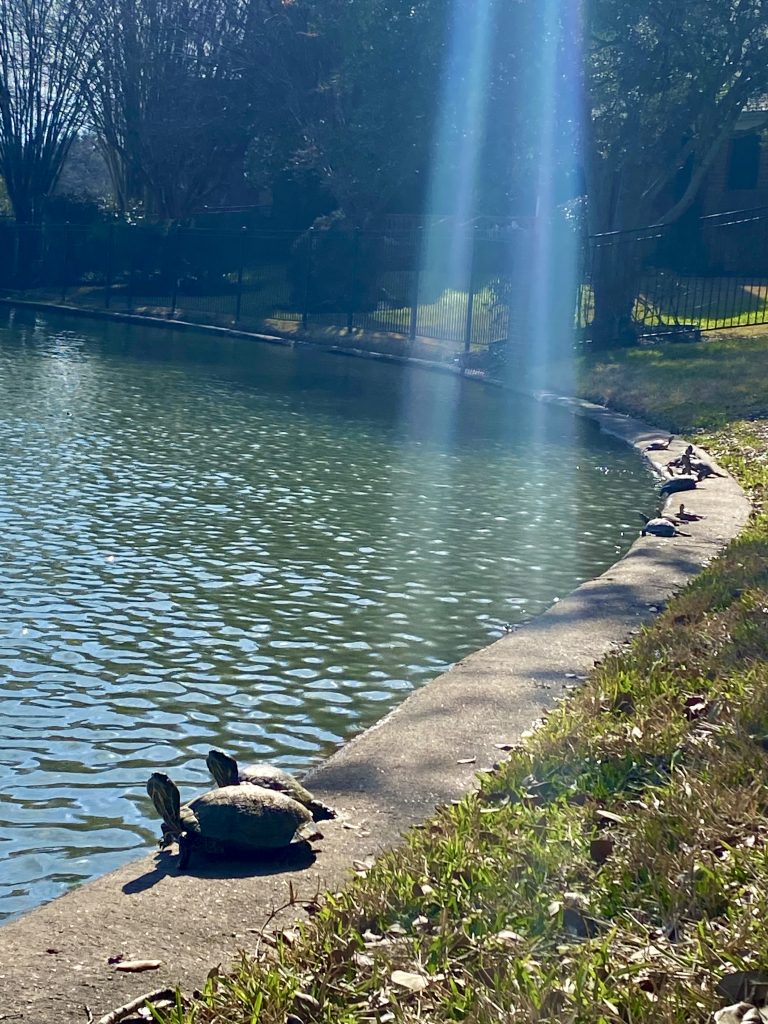 I’m back in the woods after three weeks on the road, in the city and in the suburbs—places where you wouldn’t think nature abounds. Yet, this is where turtle magic found me.

When I’m visiting my family in the Houston suburbs, most mornings I walk a short distance to a pond where I used to go with my dad to feed the turtles. I no longer feed them because when you know better, you do better and because there are now signs posted asking people not to. My dad no longer walks the earth, so I go to the pond to connect with him. I look for turtles as a sign that he is near. Since my visits over the last few years have rendered no turtles, I’d pretty much given up seeing them again.

Last week, I walked to the pond and simply said, “Hello, Dad,” and trusted he heard me. As I got about halfway around, there they were: 21 turtles, some swimming, some resting at water’s edge.

My guiding word for 2023 is thrive. The turtles are thriving! Perhaps because they are no longer eating human food, perhaps because someone has stocked the pond, who knows. But these 21 were only the first ones I saw that morning and the morning after. Then, baby turtles on the TV news, a couple on Facebook, a turtle figurine in a gift shop, another in someone’s office, and now one on my desk staring at me as I write this.

Since it has been offered in abundance, I will accept some turtle wisdom as I begin the new year. I’ll consider it field notes on thriving.

To observe the turtles sunning themselves on the bank, I had to slow down to their pace which was pretty much a standstill. They would have scrambled into the water had I not minimized my movement. And one of the things I would have never noticed had I not sat still was that the largest turtle held its right front foot up the entire time I sat there, which was about 20 minutes. It was poised for action at any moment. So, I need not confuse stillness with lethargy. Slowing down provides perspective and offers readiness.

I watched the equivalent of a teenager in turtle form work to climb out of the water onto the concrete ledge. First it allowed the current carry it to the edge, then it used its front legs to pull itself up. Except that it was unsuccessful over and over again. I don’t have any idea what goes on in a turtle’s mind, but I’ve got to say this one did not seem stressed. It didn’t thrash in the water. It didn’t give up. It simply drifted to different places on the bank and persistently hoisted until it made it to shore.

Turtle teaches us the power of conserving energy. There is no need to waste it on flailing about. And if you rush, you are sure to miss something.

I’ve been fascinated by turtle shells ever since my friend who has pet tortoises told me they love to have their shells brushed. This is also true for turtles. Of course, these were wild so that wasn’t going to happen. But as I sat watching them, I thought about how the very thing that protects a turtle is also something that can feel. Since turtles have been around since prehistoric times, they must have evolved that way for good reason. There is wisdom in shielding oneself from harm, but at the same time remaining sensitive.

I’ve been thinking a lot lately about how most of us are moving too busily or distractedly to notice whether we are thriving. How we so often react to whatever’s in front of us and find clever ways to avoid what we fear will be difficult. How in attempting to meet what mainstream culture demands of us, we might very well be missing out on the very the things that would allow us to flourish. Turtle might have something to say about that.

I wish my dad and I could have watched the turtles together last week. We would have had a leisurely amble around the pond, rich with conversation, fertile with insight. We surely would have compared field notes on thriving. Of course, in a way, we did.

Want to thrive in 2023? Connect with your soul wisdom through my healing approach to intuitive readings and spiritual mentoring. Find out more and book your session today.