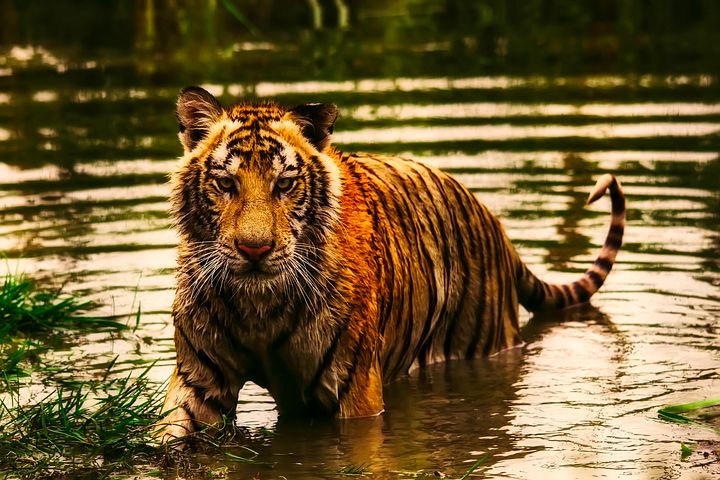 Happy New Year, hope I’m not too late! Just kidding, I’m referring to Lunar New Year today which is celebrated by many different Asian cultures. Festivities begin with the rising of the second moon after winter solstice and can last up to two weeks.

Generally, I don’t pay too much attention to the animal/element symbol for the year, but for some reason, I can’t get the Water Tiger out of my head. I think it has something to teach me.

The first and only time I saw a tiger swim was at the Denver Aquarium over a decade ago. My feelings about wild animals in captivity notwithstanding, I was mesmerized. There was something magical about seeing a giant cat skimming through water. The power, grace and novelty of it drew me to the window where I stayed for a very long time. Then I noticed something. In the wild, a tiger will swim to cool off or sometimes to hunt, but this cat was playing!

I want to embody that swimming tiger as I move through this year–with power, grace and playfulness.

It feels like we’ve all been through so much over the last few years. And while we are all craving a break, I doubt we’re going to get one. As the Age of Aquarius has dawned, we are in a time of accelerated change. It’s affecting us globally and personally. And even though the change may ultimately be for the better, it doesn’t diminish the fact that the rapidity of it is mind-boggling. Since we can’t control it, our approach to it is key. We can draw upon tiger energy for support.

When I think of tigers, I think of strength, majesty and independence. They are apex predators, so short of humans, they have nothing to fear. What if we faced the twists and turns of 2022 with the courage of a tiger? What if we wore the mantle of majesty and treated each other with dignity, even when we disagree?

Tigers are solitary creatures, and that magic could have come in handy during Covid isolation, but as we (hopefully) emerge, it still might have something to teach us about being content with ourselves. What if in 2022, we decided that we are perfect and whole just as we are? That we can take responsibility for our personal growth without deciding we are broken.

A Water Tiger year occurs every 60 years. The last one was in 1962. Because I was only two then, I consulted the Internet and learned that some of the major US events that year included: John Glenn becoming the first American to orbit the earth, the Cuban Missile Crisis, rioting on the University of Mississippi campus following Black student James Meredith’s attempt to enroll, and the Supreme Court ruling that mandatory prayers in public schools are unconstitutional. And for you shoppers, the first Target, Walmart and Kohl’s stores opened.

Who knows what we can expect from this Water Tiger year? But it’s no ordinary tiger we are dealing with here. It’s a water tiger. The element of water signifies creativity and flow. We can choose to flow with changes rather than fight them. We can create new and more nourishing ways of being. And don’t forget that water is the strongest element. Water is persistent and resilient. It can go around any obstacle and not lose its essential nature.

When the swimming tiger at the aquarium finished playing in the water, it hopped up on the bank, shook itself off, and promptly lay down for a rest. It didn’t check one last text, do a load of laundry, or worry about what was happening in the news. Nope, it just closed its eyes for a little nap. I’d like to embody that too.